CSF’s vision is to build a strategically agile public service ready to manage a complex and fast-changing environment.

CSF’s mission is to position the Singapore government to navigate emerging strategic challenges and harness potential opportunities by:

A Short History of Futures Work in the Singapore Government

Singapore began its future planning efforts as an experiment in the Ministry of Defence in the late 1980s. In 1995, the Government set up the Scenario Planning Office in the Prime Minister’s Office to develop scenarios from a whole-of-government perspective. The office was renamed the Strategic Policy Office (SPO) in 2003 to reflect the strengthened links between foresight work and strategy formulation.

In 2009, the Centre for Strategic Futures (CSF) was established as a futures think tank within SPO to focus on issues that may be blind-spot areas, pursue open-ended long-term futures research, and experiment with new foresight methodologies.

More recently, various Government agencies have recognised the value of foresight work and begun to set up their own foresight teams, which conduct more domain-specific horizon scanning and futures research.

On 1 July 2015, CSF became part of the new Strategy Group in the Prime Minister’s Office, which was set up to focus on whole-of-government strategic planning and prioritisation, whole-of-government coordination and development and to incubate and catalyse new capabilities in the Singapore Public Service.

Peter Ho is the Senior Advisor to the Centre for Strategic Futures, a Senior Fellow in the Civil Service College, and a Visiting Fellow at the Lee Kuan Yew School of Public Policy. 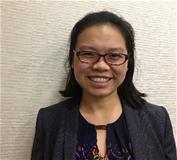 Jeanette is the Head of the Centre for Strategic Futures and Director of Futures at PMO Strategy Group.

Jeanette joined the civil service in 2005, starting her career at the Defence Policy Office, MINDEF, where she worked on Singapore’s defence relations with international partners. In 2009, she joined the Strategic Policy Office, where she became one of the founding members of the Centre for Strategic Futures (CSF). During the early years of the CSF, Jeanette was involved in expanding the centre’s network of exciting minds and interesting personalities, growing futures capabilities across the public service, as well as organising and curating the first in an ongoing series of Foresight Conferences (now an integral part of Singapore’s Foresight Week). In 2018, she returned to the Ministry of Defence to help build up foresight capability there. During her stint, Jeanette drove research into emerging geopolitical trends and opportunities, and developed a research agenda and process for the new team.

Jeanette is a political scientist and economist by training, having graduated with honours from the University of Chicago in 2005. She continues to stay current in the field as an alumna of the Munich Young Leaders, International Institute of Strategic Studies’ Southeast Asian Young Leaders Program and the Young Strategists Forum. She is married with two young children. In whatever spare time the children leave her with, she nurses a dangerous addiction to caffeine and the written word. Seema has had a wide-ranging career in public policy and research. She was previously with the Singapore Ministry of Foreign Affairs (MFA), where she served at the United Nations in New York; in the International Organisations and South Asia Directorates; and in the Arctic Affairs Working Group that spearheaded Singapore’s successful bid for permanent observership at the Arctic Council. Prior to MFA, Seema spent several years at the Duke Global Health Institute and the Sanford School of Public Policy at Duke University in the United States, managing field research in international development policy issues, particularly global health disparities in Africa and Asia. Seema holds a Bachelor of Arts in Political Science with honours from Duke University. She also holds a graduate certificate in Public Health from the Gillings School of Global Public Health at the University of North Carolina at Chapel Hill.

Chor Pharn has extensive public service experience helming strategic and business development roles. In his current post as Principal Strategist, he supports and advises on CSF’s foresight research agenda, and translation into strategy at various government platforms. He has also served in the Ministry of Trade and Industry, overseeing strategic foresight and futures thinking to support economic policy analysis, and in a business development role at the China office of the Infocomm Development Authority of Singapore. Chor Pharn has a Masters of Electrical Engineering from Cornell University.